Here’s a scanned copy of the memorandum issued by the Department of Interior and Local Government (DILG). This is originally posted in the official website of Tacloban City government (www.tacloban.gov.ph) (accessed on July 25, 2012).

Have we forgotten that once upon a time newly elected President Noynoy Aquino directed all members of the Cabinet and other government instrumentalities to refrain from associating the President’s personality and identity in their programs and projects?

It looks like only few DILG offices enforce this memo. This must have been forgotten elsewhere but not in Tacloban City. 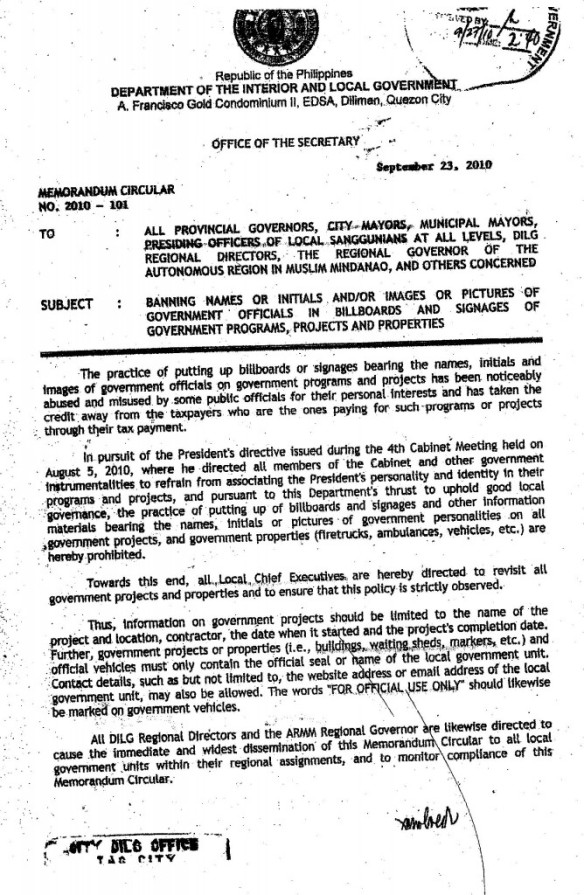 This memorandum of DILG clearly stated that

the practice of putting up of billboards and signages and other information materials bearing the names, initials or pictures of government personalities on all government projects, and government properties (firetrucks, ambulances, vehicles) are hereby prohibited.

Until we see the results, this memo remains a useless paper. Even the President himself starts to forget that he once told the Filipino nation that epals have no place in his administration.

Even when the anti-epal bill (Senate Bill No. 1967) of Senator Miriam Defensor Santiago is enacted, it will have no meaning if the Filipino nation continue to tolerate epals in this society.

Among the epals in the government I am watching is Joel Villanueva. But despite all criticisms, TESDA Director Joel Villanueva continue to justify his billboards and other ads. He is determined to his ambition to become senator and it seems President Aquino has no problem with. That’s the problem with Noynoy Aquino – he is inconsistent and he give special treatment to his men.

[English translation of the speech delivered at the Session Hall of the House of Representatives, Batasan Pambansa Complex, Quezon City, on July 23, 2012]

Senate President Juan Ponce Enrile; Speaker Feliciano Belmonte; Vice President Jejomar Binay; former Presidents Fidel Valdez Ramos and Joseph Ejercito Estrada; eminent Justices of the Supreme Court; distinguished members of the diplomatic corps; honorable members of the House of Representatives and of the Senate; our leaders in local government; members of our Cabinet; uniformed officers of the military and of the police; my fellow public servants;

And to my Bosses, the Filipino people: a pleasant afternoon to all.

This is my third SONA. It wasn’t too long ago when we began to dream again; when, united, we chose the straight and righteous path; when we began to cast aside the culture of wang-wang, not only in our streets, but in every sector of society.

END_OF_DOCUMENT_TOKEN_TO_BE_REPLACED 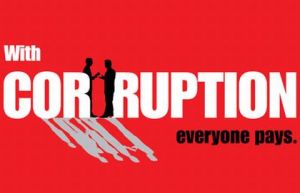 The collective effort to end corruption has long started but why do we keep on getting big news about big money involving big people which can be described in one word called corruption? So frustrating.

I also wonder how and why many of the Filipino people have seemed forgotten how issues of corruption and plunder that topple down former President Joseph Estrada. Millions of people even want him back to Malacanang. So disgusting.

After late President Ferdinand Marcos, I would say that our nation have better view of what corruption is and how it affect the lives of the people. I think that understanding help in inspiring people to form collective efforts that ended the presidency of Joseph Estrada.

Corruption is often a misunderstood word. Like culture, it is relative. What looks like corruption may be just a simple SOP or just a gift for someone.

Corruption can take many forms. Small cases of corruption can easily be understood but the parents of what we call small corruption cases are so complex to understand. Thanks to Sheila S. Coronel for allowing us to have good view on how crooks were able to steal public funds and able to hide stealing for a long period of time that the accumulated amount become unbelievable.

I hope many of will be able to read it to learn and become vigilant. Of course not to replicate those grand corruption cases.

In one beer talk with friends, my sangkay (friend) pointed out that a government official who fails to disclose a big amount of money or asset not just betraying public trust but already guilty of corruption.

So in the long and heated discussion, I asked his take on President Noynoy Aquino’s P37-M excess campaign funds (source: PCIJ Blog) which he failed to declare. I was surprised that for him, it did not matter. Actually, the man is yellow fanatic.

So when we talk about corruption, sometimes it depends to who we are talking to.

One important message in the 8 Ways to Commit Grand Corruption is that no matter how grand the corruption was – it would still end up to court and jail.

I hope tomorrow never comes. I am certain that tomorrow, the time the Impeachment Court will decide whether CJ Corona is guilty or innocent, will mark another scar in our history.

My friends have known that I am on the side of innocence of the Chief Justice. I am basing on the accusations and not on the side issues and mudslinging of the prosecution.

After hearing the both sides, I told my friends that Chief Justice Renato Corona has not committed impeachable offense but rather he committed mistakes by not lining up as President Noynoy Aquino’s ever loyal ally.

The impeachment trial exposed to us various mind-boggling revelations. It exposed to us the well orchestrated movements of the government agencies to favor President Aquino’s desire to oust the Chief Justice.

I will wait until tomorrow and whatever the verdict of the Impeachment Court, I would accept it. I have full trust to Senator-Judges except Sen. Franklin Drilon and Sen. Antonio Trillanes.

I think the best return Sen. Antonio Trillanes would be getting would be a slot in senate slate of the administration party on the 2013 midterm elections. Sometimes, election matters rather than principle.

It is bad when ordinary citizen like me would suspect the objectivity of some Senator-Judges. It is unhealthy for the Senators to get shades of suspicion of being bias and being one of President’s men.

The Chief Justice is a true believer of justice. If not, he should have resigned. But like unpopular hero, he subjected himself to severe pains of prejudice. He had sustained the pains and trouble of trial by publicity. I commend him for setting good example of facing the political vengeance of this administration.

To everyone who love